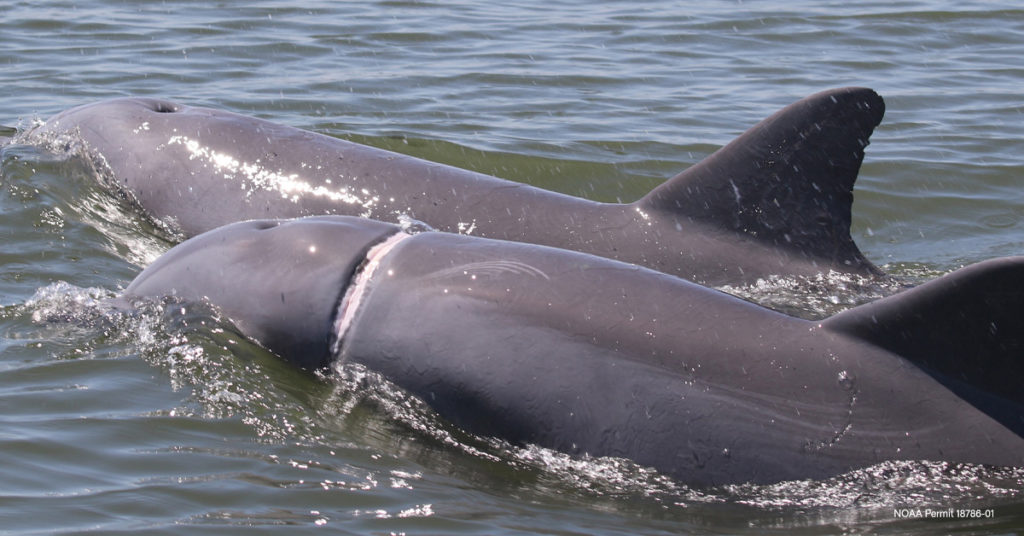 However, situations can arise when we are able to provide medical intervention for a suffering animal. In September 2017, during a routine capture-release health assessment of common bottlenose dolphins in Barataria Bay, Louisiana, we sighted a dolphin entangled with monofilament (thick fishing line) noticeably cutting through the skin and blubber layer about 15 cm behind her eyes.

We first identified this dolphin, now known as YV7, in November 2010 during photo-identification (photo-ID) surveys. We noticed the scarring at this time, so something had been going on for a long time. However, photo-ID surveys are not designed to facilitate interventions. So when we saw YV7 again during the health assessments in 2017, we were able to take a closer look. We believed that some kind of fishing line caused the scar, but we were unsure if the animal was still entangled. After further evaluation and discussion, we decided to attempt capturing the dolphin to be sure.

"The Conservation Medicine team at NMMF is dedicated to conducting important research to help inform conservation efforts and to participating in direct conservation activities when they arise."

The potentially entangled dolphin was traveling in a tight group with three others.

The dolphins weren’t evasive, swimming near the bow of our boat, and even made our job easier by moving into shallower water with a pretty firm bottom. Eric Zolman, NMMF scientist and capture lead, made the decision that this was a relatively safe situation to try catching the dolphins, and the catch boat set a net around the group of four. Soon after completing the set, one of the dolphins hit the net, and a chase boat with dolphin handlers was quickly on the scene. The crew rapidly removed the dolphin from the net, recognized it was not the scarred dolphin, and released it. This left a trio of dolphins swimming inside the net. We shrank the diameter of the net and soon after all three dolphins piled into the net together. Our dolphin handling team again responded promptly, and all three dolphins were quickly and safely in hand.

The scarred and entangled dolphin proved to be a female, 226 cm in length. The veterinary team assessed the scarring via ultrasound and, by carefully probing the wound, discovered an embedded and knotted monofilament fishing line still wrapped around her, buried under the skin. Veterinarians carefully removed the line from the scarred tissue, taking care to not leave any fragments behind and to not inflict any further damage. Just over an hour after setting the net, we released YV7 back into her home waters, free from the danger and discomfort from her more than seven years of entanglement. 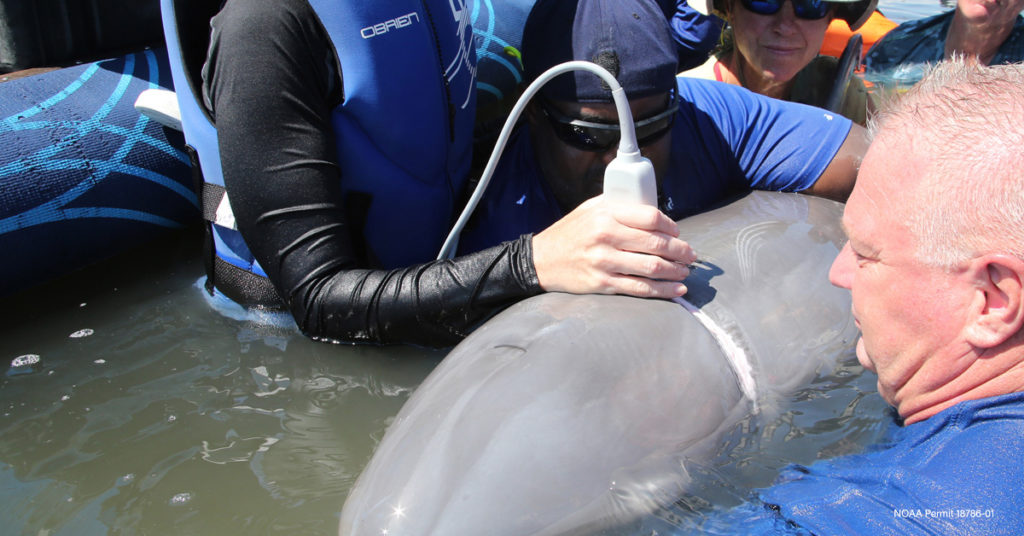 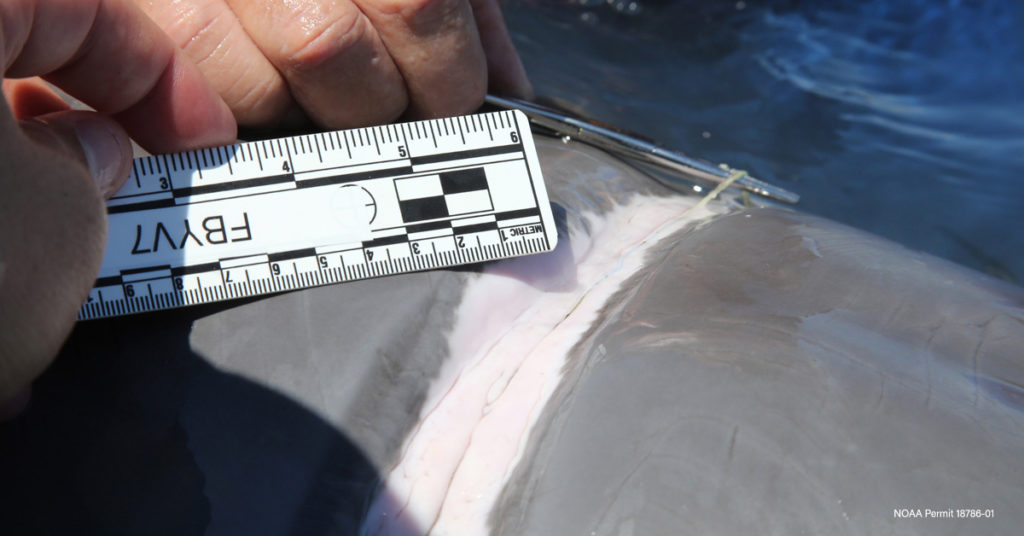 Since the disentanglement in 2017, field biologists have spotted YV7 on multiple occasions during photo-ID surveys in Barataria Bay, Louisiana.

From afar, YV7 looked healthy and was behaving normally. In 2018, we conducted another health assessment in Barataria Bay, and we found, captured, and assessed YV7 again. We are happy to report that our veterinarians determined that YV7 was pregnant. On June 7th, 2019, during the Reproductive Outcomes Survey, CARMMHA researcher Mandy Tumlin, with the LA Dept of Wildlife and Fisheries, located dolphin YV7 with a healthy neonate. We feel even better about her disentanglement knowing that she continues to be a productive member of the population. The NMMF Conservation Medicine team will be sure to keep an eye out for YV7 in future surveys and Barataria Bay health assessments to monitor her progress. 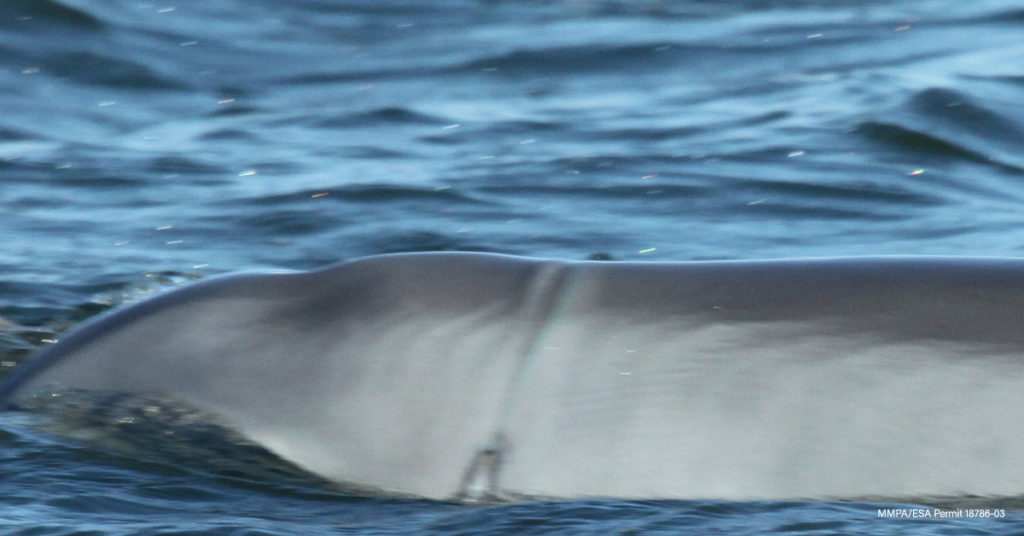 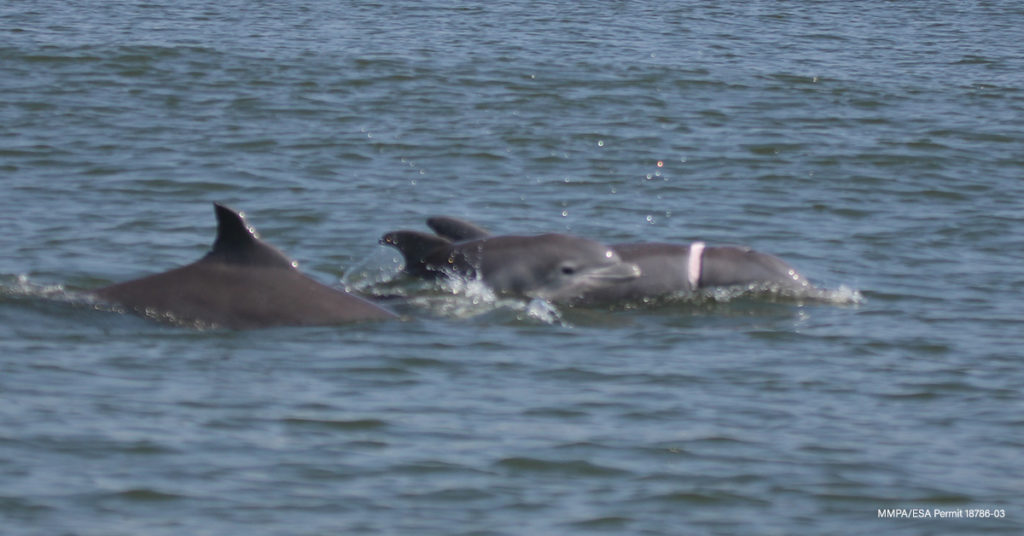 The Conservation Medicine team at NMMF is dedicated to conducting important research to help inform conservation efforts and to participating in direct conservation activities when they arise. Basic research and conservation are two complementary and necessary tasks to achieve our mission. So we are especially excited when we can efficiently and effectively carry out both activities when we are out in the field.

NMMF Scientists and the Acoustical Society of America

Reaching for the impossible: the NMMF research Team