What we know about impacts on dolphin and whale populations - past, present, and future

On April 20, 2010, an explosion on the Deepwater Horizon oil rig tragically killed 11 workers. The rig collapsed approximately 41 miles off the coast of Louisiana, starting a catastrophic flow of oil into the Gulf of Mexico. Over an 87-day period, approximately 134 million gallons of oil flowed from the damaged well, making it the largest marine oil spill in U.S. history.

In this blog, Dr. Lori Schwacke discusses what we know about the impacts of the Deepwater Horizon oil spill on Gulf of Mexico dolphin and whale populations. Dr. Schwacke currently serves as NMMF’s Chief Scientist for Conservation Medicine, but 10 years ago, she was at NOAA and helped lead the Deepwater Horizon Natural Resource Damage Assessment for marine mammals. Here she reflects on past and current research, as well as research that is critically needed for the future.

Reacting in the wake of the spill

When the Deepwater Horizon (DWH) oil spill began in April 2010, it quickly became an “all-hands-on-deck” situation for NOAA. My team of field biologists and wildlife epidemiologists was focused on health research for protected species at the time, and we were quickly pulled in to help with the Natural Resource Damage Assessment (NRDA) for marine mammals. As it became apparent that large amounts of oil would spread to the coast, we focused our efforts on bottlenose dolphins living in the bays and sounds of Louisiana and Mississippi, which were in the direct line for oiling. We worked with other NOAA offices and partners to pull together field teams, which we rapidly deployed to the Gulf to begin collecting data on the numbers of dolphins, where they were, and if they were being exposed to the oil. Before the DWH spill, common thinking was that dolphins and whales would avoid oil. After reports of thousands of cetaceans being seen in oil, we quickly learned that this was not the case.

Barataria Bay, LA (and the 2,000 to 3,000 dolphins that call it home) became a focal point for the marine mammal injury assessment – and rightfully so, as it received heavy and prolonged oiling, requiring clean-up efforts that lasted for years after the end of the spill. It was there where I began collaborating with veterinarians from the NMMF to improve our methods for assessing dolphin health – a key step towards documenting the types and severity of oil-related injuries. We began incorporating innovative field diagnostics, such as lung and reproductive ultrasound, leveraging the tools that my NMMF colleagues had developed as part of their mission to ensure the best quality care for the US Navy’s marine mammals.

NMMF and our collaborators developed and applied innovative diagnostic techniques to determine the oil's toxic effects on wild dolphins.

From those NRDA studies, we learned that dolphins exposed to DWH oil suffered significant health effects. The Barataria Bay dolphins had lung disease from inhalation and/or aspiration of oil, impaired stress response, and compromised immune function that led to increased infection and disease. Many of them did not survive and became part of the largest and longest-lasting cetacean mortality event ever recorded for the northern GoM, with over one thousand documented dead dolphins. Through boat-based photographic surveys, we also documented low survival and poor reproductive success for dolphins from Barataria Bay and Mississippi Sound in the years immediately following the spill.

After the DWH NRDA ended in 2015, I joined the NMMF team and we have continued our important research to document and understand the long-term impacts of chemical spills on the health of marine mammal populations. With funding from the Gulf of Mexico Research Initiative, we formed a consortium of researchers from across 10 organizations, including experts in pathology, immunology, cardiology, ecology, and statistical modeling, as well as several protected species experts from NOAA. Our research consortium has continued to study dolphins and other marine mammal species in the Gulf of Mexico to determine how/if they can recover following such a catastrophic environmental event.

In the years immediately following the spill, we described the types, severity and prevalence of adverse health effects in dolphins and whales.

Our research shows that in the decade after the spill, dolphins exposed to DWH oil continue to suffer from effects like lung disease, abnormal stress response, reproductive failure, and immune dysfunction. 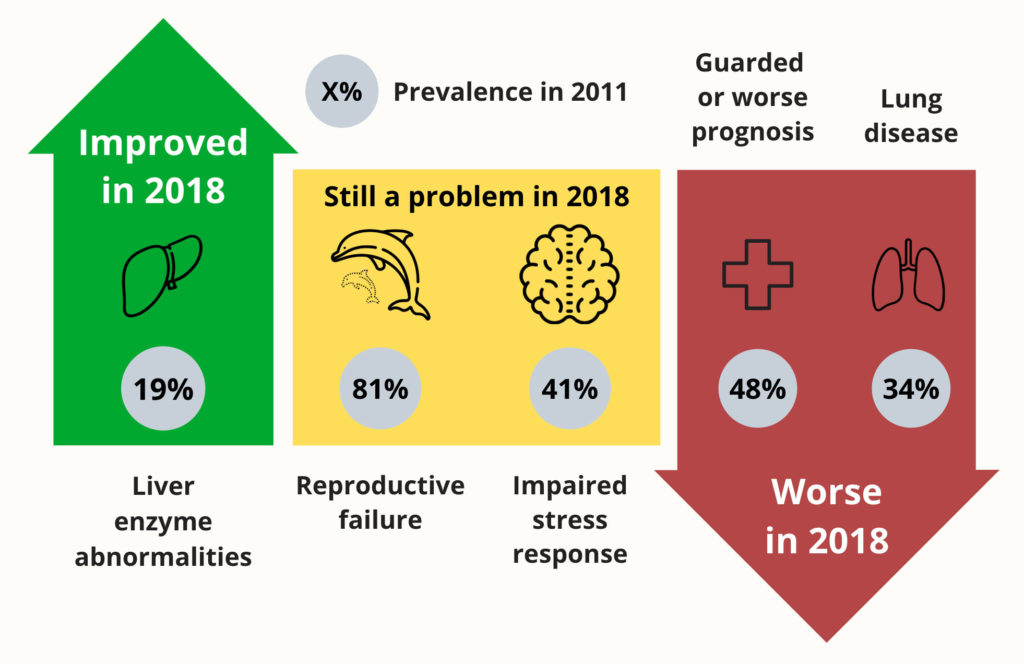 Our continued studies have produced some important findings. Most importantly, we’ve documented that the health of those Barataria Bay dolphins exposed to DWH oil has not improved in the decade after the spill, and in some cases their health has worsened. The worsening conditions are due in large part to chronic, and potentially progressive, lung disease. These findings are consistent with human health studies that have reported an increase in chronic respiratory symptoms among oil spill responders, with some symptoms getting worse over time.

We’re also finding that even many years after the spill, dolphins are still struggling to successfully produce offspring. At a recent scientific conference, NMMF’s Executive Director and Chief Medical Officer, Dr. Cynthia Smith reported that dolphins in Barataria Bay “have a sustained low reproductive success rate of approximately 20%” through 2018. This is in comparison to other dolphin populations, where approximately 65% of pregnancies successfully produce a calf. Dr. Smith further concluded that “we do not expect the low reproductive success rate to improve until the overall health of reproductive females recovers”.

Like people, dolphins and whales mature slowly and are long-lived. Many cetacean species have a life expectancy well over 50 years, do not produce their first calf until nearly 10 years of age, and then only have a single offspring approximately every 3-5 years. With so many sick and dead individuals in the wake of the DWH spill, our models predict that it will take decades for their populations across the Gulf to recover. Our research also suggests that individuals who survived exposure to DWH oil will be less likely to successfully cope with other stressors in their environment. Furthermore, with the reduced population numbers, any additional environmental pressures that also affect survival or reproduction are likely to extend the already lengthy time required for populations to recover to their pre-spill baseline numbers.

How much did DWH affect bottlenose dolphin populations?

Unfortunately, recovery from the oil spill is not the only challenge these animals face. Environmental pressures from climate change, as well as increased human use of coastal and ocean resources impose additional stress on marine mammal populations. Areas of the northern Gulf with large inshore populations of dolphins may be particularly impacted in the near future due to changes in salinity from both extreme flooding events (which are likely to become increasingly frequent) and coastal restoration plans that involve diversions from the Mississippi River.

The lingering effects of DWH oil exposure means dolphins and whales may be more vulnerable to other threats. 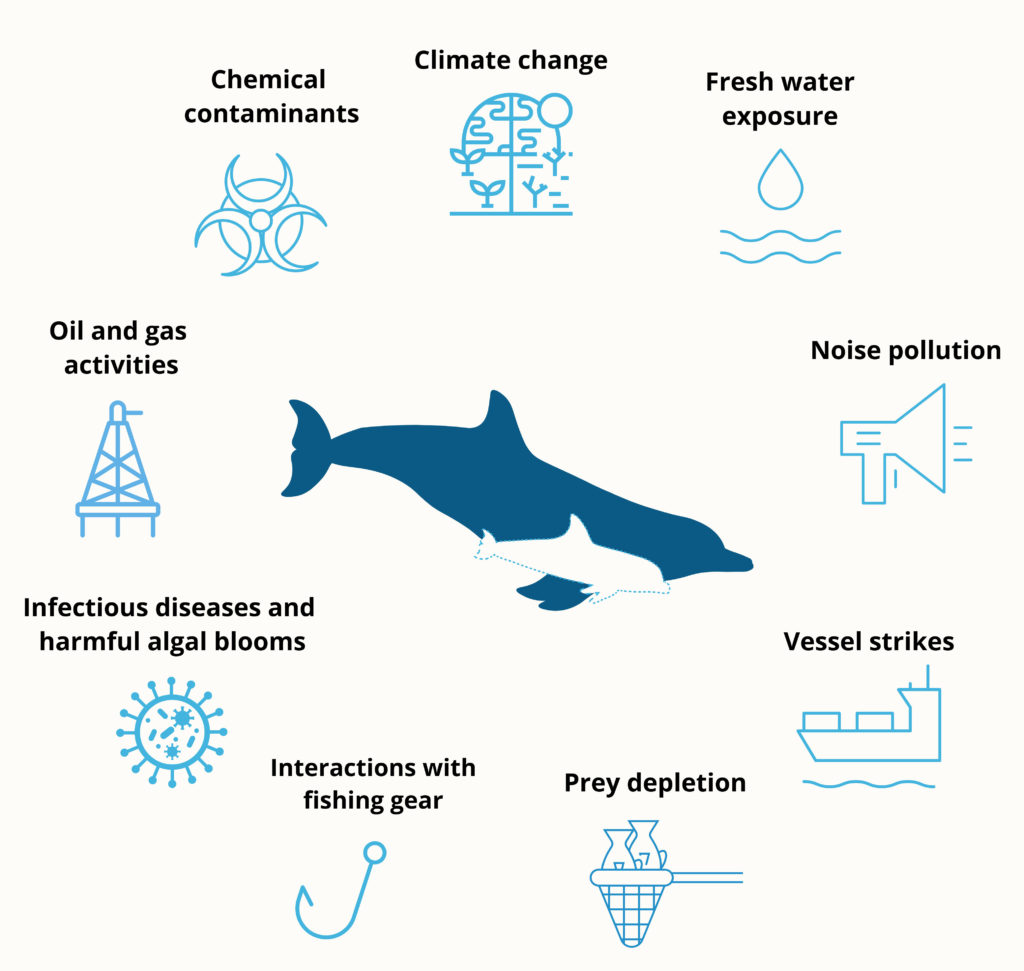 Now, 10 years after the DWH oil spill, is a critical time to continue to study Gulf of Mexico marine mammals to both provide the necessary science to make wise management decisions and identify ways to best support marine mammal recovery. The challenges associated with studying these populations to describe both their recovery from past stressors and their responses to future threats require creative, big ideas. The NMMF is committed to driving impactful science that will promote conservation actions with meaningful outcomes to protect these animals.

NMMF continues to collaborate with our partners to support cutting-edge science that will lead to effective conservation actions and benefit the health and resilience of marine mammal populations living in the Gulf of Mexico. If you would like to contribute to the advancement of these goals, please consider donating to the NMMF.

How much did DWH affect marine mammal population sizes?

Our models predict that offshore species suffered between 6 to 23% reductions in their population sizes due to the DWH oil spill, and most nearshore and coastal dolphins lost over half their population. 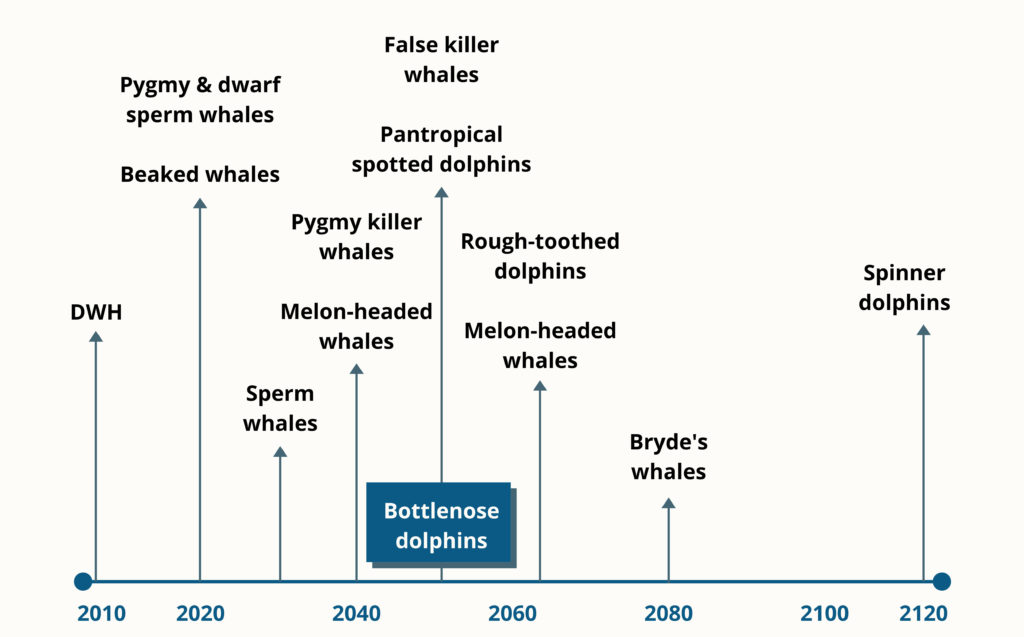 The lingering effects of DWH oil exposure means dolphins and whales will be more vulnerable to other threats.

NMMF Scientists and the Acoustical Society of America